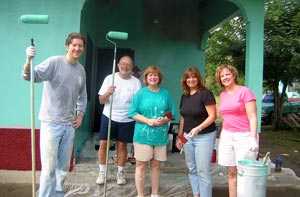 It was a chilly January morning when a group of Rotarians, and fellow volunteers, loaded into a van and made the trek from Champaign to Chicago O’Hare. The crew included Champaign West Rotarians Eileen Prillaman, Debbie Hirschi (and her son Mark), Ginny Menzer, Gary Mason and Eric Robeson. In addition, Mary Hodson (of C-U Sunrise Rotary) and son Tim joined the group.

After a long day of travel, (by van, plane and school bus) the crew reached the Ministerios de Fe Vida Nueva, just outside of Azacualpa, Honduras. The next morning, the team set out to finish the cottage, which was the product of two years of fundraising and, in the case of an earlier trip by Champaign West Rotary’s Mark Ballard, Woody Chenault and Mike Hirschi, labor for the club. The cottage needed to be painted inside and out, ceiling fans and doors needed to be hung and furniture needed to be purchased, assembled and put into place. 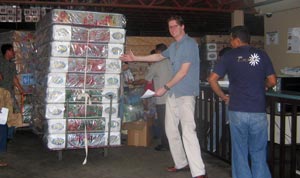 In addition to work, the group of Rotarians made a trip to a neighborhood within the town of Azacualpa that was constructed by the Rotary Club of San Pedro Sula (Honduras) for people who had lost their homes due to Hurricane Mitch. Gifts were delivered and the need for the construction of a septic system for the neighborhood was reemphasized (the need for the system was identified in the earlier visit by Champaign West). 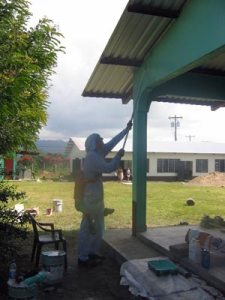 Mid-week, the group made a journey to the bustling city of San Pedro Sula to purchase furniture and other items for the cottage. In addition to nine sets of mattresses and box springs purchased at a mattress shop, a variety of other household items were purchased (at a large “super store”) and wedged into every available spot on the school bus. That evening, the group visited a meeting of the Rotary Club of San Pedro Sula. President Prillaman thanked the club from the podium and an exchange of club flags was conducted. During the meeting, the San Pedro Sula Rotary Club expressed their interest in working with Champaign West on the septic system project on the land which their Rotary club owns in Azacualpa (the site of the Rotary Village our group visited earlier in the week). The club gave verbal permission for the system to be constructed on their land and the Club’s President-Elect (a Civil Engineer) took a copy of rough drawings (created by Woody Chenault) to make official working plans from.

By the end of the week, the work on the cottage was complete. The trip was capped off by a cottage dedication ceremony and party where people from the community of Azacualpa were invited in to see the new cottage. Saturday morning came early (like 3:30 a.m. early), but thanks to our friend, a seemingly ever-present rooster, wake up calls were received at 2:00, 2:15, 2:30, etc. (what happened to crowing at dawn?) and no one missed the bus.